Model Overview
Like the regular-duty F-150, Ford's Super Duty F-250 and F-350 are available in a very wide range of configurations for 2008, with three cab styles--regular, SuperCab and Crew Cab--and two bed lengths.
Three different engines are offered on the Super Duty trucks, too. A 5.4L V8 making 300 horsepower and 365 pound-feet of torque is standard, and for heavier duty there is either the 6.8L V10, with 362 horsepower and 457 lb-ft, or the 6.0L 'Power Stroke' turbo-diesel V8, making 325 horsepower and 570 lb-ft. Each engine is available with either a six-speed manual or five-speed automatic transmission.

The turbodiesel is a new-generation engine that uses dual-sequential turbochargers to help improve low-end performance and high-pressure common-rail fuel injection to help reduce emissions; emissions numbers are on par with competing gasoline engines, according to Ford.

With either the diesel or V10, the Super Duty can tow up to 15,000 using a conventional trailer hitch. The F-350 is available with a dual-rear-wheel (DRW, or "dually") setup that allows better stability for towing the heaviest trailers, and there's also an available TowCommand system, which includes a unique trailer-braking strategy that works in conjunction with the Super Duty's anti-lock braking system when it detects poor traction. The Super Duty has a fully boxed front frame section, and Ford claims to use the thickest-gauge steel of any pickup in its frame.

The Super Duty models have a more upright appearance compared with the standard-duty F-150, especially at the front. The front end is more squared-off, with an upright grille that borrows some elements of its appearance from big rigs.

Regular cab and SuperCab versions of the F-250 and F-350 can be specified with four-wheel drive, but the Crew Cab comes only with rear-wheel drive. Both come in XL, XLT, and Lariat trims, with the Lariat including a luxurious premium leather interior, automatic climate control, and many comfort and convenience features including adjustable pedals.

A newly available rearview camera system, mounted within the rearview mirror, activates when the vehicle is shifted into reverse, using a camera mounted onto the tailgate to help guide drivers in tight-clearance situations. Green lines help guide the driver, marking the width of the vehicle, and they turn red as the truck gets too close to a barrier or object. Another standout feature is the PowerScope power-folding, power-telescoping mirrors, which include a spotter mirror and extend outward an additional 2.75 inches as space permits. Setting for the mirror system are integrated with the seat- and pedal-memory system. 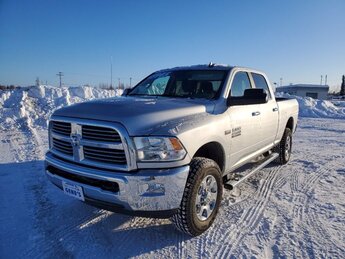 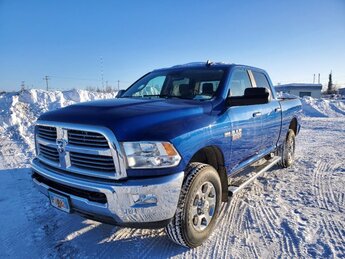 2018 Ram 2500 Big Horn
Silver
* MSRP is the Manufacturer's Suggested Retail Price (MSRP) of the vehicle. It does not include any taxes, fees or other charges. Pricing and availability may vary based on a variety of factors, including options, dealer, specials, fees, and financing qualifications. Consult your dealer for actual price and complete details. Vehicles shown may have optional equipment at additional cost. Price subject to change.